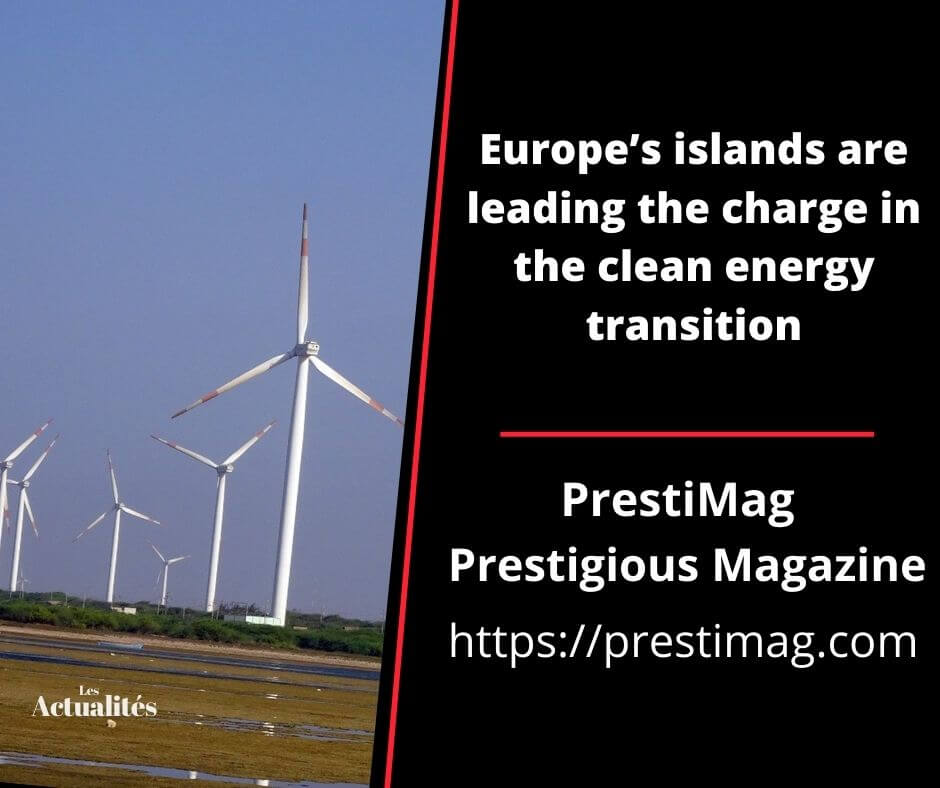 Carbon dioxide from power generation must be reduced to reach EU climate targets for cutting greenhouse gas emissions by at least 55% by 2030 and becoming climate neutral by 2050. European research and innovation are fostering new disruptive technologies and sustainable solutions to make this happen.

So how is it possible to establish energy self-sufficiency that simultaneously safeguards the islands’ futures and meets climate goals? The wind blows, the sun shines and the waves lap their shores. Harnessing these renewable energy sources (RES) has tremendous potential to reduce or eliminate the need for fossil fuels-derived energy.

The ways in which islands can make changes to transform their energy landscapes are nearly as diverse as the islands themselves, and Europe’s islands are making pioneering contributions across the board that have caught the world’s attention.

The island of Ærø in Denmark, with its brightly painted houses and cobblestone streets, is well on its way to a complete transition to RES, garnering it first place in the EU’s RESponsible Island competition rewarding holistic achievements in local renewable energy initiatives.

According to Halfdan Abrahamsen, Media and Information Manager at Ærø EnergyLab, the island now regularly generates more energy with its wind farms than it uses – about 125% to 140% annually. District heating plants integrated with warm water storage rely on solar energy, heat pumps, biomass and biofuels to take care of about 70% of the island’s heating needs.

On smaller and more isolated islands, being ‘off the grid’ may seem like a busy urban dweller’s dream vacation, but for inhabitants it means energy isolation leading to challenges creating potable water. These islands can now take some cues from the second smallest of the Canary Islands, El Hierro, which joined Ærø as another RESponsible Island prize winner.

Desalination and water distribution accounts for more than 40% of El Hierro’s annual energy demand and was really the impetus for the wind-pumped hydroelectric plant developed in the context of the  100% RES-EL HIERRO project.

‘Desalination and water distribution accounts for more than 40% of El Hierro’s annual energy demand and was really the impetus for the wind-pumped hydroelectric plant developed in the context of the 100%RES-EL HIERRO project,’ explained Santiago González, Chief Executive Officer of Gorona del Viento El Hierro, the company that runs, operates and maintains the power station.

When the winds are blowing, they turn the turbine to generate electricity. Surplus wind power is used to pump the water from a lower reservoir to a higher elevation, ready to work with gravity to generate electricity even when the winds cease to blow. The plant will be able to cover up to 70% of the annual energy demand of the island and has even supplied 100% for up to 25 consecutive days!

Hybrid technologies like these that find ways to make ‘deposits’ in times of excess boost the potential of intermittent RES. The tiny Greek island of Tilos has exploited this potential in a pioneering hybrid power station consisting of a wind turbine, a small photovoltaic (PV) park and a battery storage system, the first of its kind in Greece and among the first in Europe. These accomplishments and more have won it three European awards and a RESponsible Island prize.

According to Eustathios Kontos, General Secretary of the Island of Tilos, prior to the TILOS project, which began in 2015, there were only a handful of residential PV installations. A few years later, the island boasts a fully functioning hybrid power station that can supply around 50% to 60% of needed energy even during a mild wind year and, during some winter months, has exported excess clean energy to neighbouring islands.

There’s more than one way to support a clean energy transition and the islands are powering ahead with a multifaceted approach.

‘TILOS’ success inspired us to expand the penetration of clean energy production, energy saving measures and intelligent energy management in areas including public lighting and management of the water network.

‘TILOS’ success inspired us to expand the penetration of clean energy production, energy saving measures and intelligent energy management in areas including public lighting and management of the water network. We also added a conventional and a PV-based electric vehicle (EV) charging station. Carbon neutrality is our ultimate aim in the near future,’ added Kontos.

Transportation is a major contributor to climate-changing emissions and islands are moving forward in this area too. Ærø is encouraging EVs and has cut bus emissions by 40% with solar panels and gas-to-liquid fuel. Free bus rides means the green buses now transport five times as many people, significantly reducing car-related pollution and the expenses of road maintenance and expansion.

And you won’t hear – or smell – Ellen on the Danish seas. Ærø’s fully electric ferry Ellen is the world’s largest, developed within the context of the E-ferry project.

Community involvement is a recognised prerequisite for long-term success, and while this holds true everywhere, on small islands it is even more critical.

Cooperatives are a Danish tradition, from the first cooperatively owned dairy created by Danish farmers in 1882 to the oldest operating wind turbine in the world (43 years and counting!) developed by Danish teachers.

When you hook up to one of our three district heating plants, you must buy a share by default. In our experience, local ownership results in local acceptance and local enthusiasm. “Not in my backyard” is a phrase known to anyone who has tried to erect a wind turbine or build a solar plant – local ownership lubricates the gears of change.

Ærø’s first community-owned wind farm was established in 1985 and its wind farms continue to be community-owned. Similarly, the district heating plants are private companies that are cooperatively owned. Abrahamsen noted: ‘When you hook up to one of our three district heating plants, you must buy a share by default. In our experience, local ownership results in local acceptance and local enthusiasm. “Not in my backyard” is a phrase known to anyone who has tried to erect a wind turbine or build a solar plant – local ownership lubricates the gears of change.’

González agreed: ‘Ultimately, changes that benefit citizens foster acceptance and support. Our charging points for cars are free and a portion of savings from the wind-pumped hydroelectric facility are passed on to islanders as subsidies to purchase EVs or home PV systems.’

The rich tradition of Tilos’ inhabitants in progressive innovation has played a significant role in the island’s successful transformation. Tilos is not alone: survey of 15 Aegean islands carried out by the project showed that nearly 75% of islanders supported transition to an energy future in line with the Tilos model.

Deciding on what to implement and how is not as simple as the successes featured here might make it seem. Because future scenarios are difficult to explore and strategies are hard to align, the INSULAE project has developed a novel investment planning tool for islands, offered as a software-as-a-service.

‘The investment planning tool gives robust insights from scenarios with sustainable options tailored to an individual island and with a step-by-step long-term pathway,’ said Jeanne Fauquet, product manager at Artelys. It is also a communication tool that helps share visions of the future with a larger audience to get everyone on the same page.

So how do the islands turn their action plans into actions? ‘The NESOI European Islands Facility provides professional onsite technical assistance to local authorities and private bodies, such as energy analyses, business and financial modelling, definition of tender procedures, etc. The idea is to empower local island entities through capacity building and networking,’ explained Andrea Martinez, deputy managing director at Sinloc and NESOI project coordinator.

NESOI support is open to all of Europe’s 2,400 inhabited islands and the team is ready to invest a total of €6.2 million. Each beneficiary will receive a maximum grant amount of €60,000 and an additional €60,000 worth of technical assistance provided onsite by the NESOI team of experts.

The Facility’s first open call in October 2020 resulted in approval of 28 projects expected to eliminate around 300 kilotonnes of carbon dioxide emissions annually. The second funding call will be launched in October 2021.

NESOI is ensuring the long-term viability of projects by selecting those that can maintain positive profitability with medium- to low-risk investments, but projects at all levels of maturity can apply for funding. Interested parties can check out the NESOI website and subscribe to the NESOI newsletter for updates.

Green credentials” enhance the islands for citizens and visitors, and local economies and their populations are revitalised, motivating further action

Martinez added: ‘Perhaps the most impressive outcome of the NESOI project was that, after the success of the first call, our initial projected investment mobilisation of €100 million has increased almost 10-fold, reaching a new projection close to €1 billion.’

Gaining momentum and setting the pace

Europe’s clean energy transition is gaining momentum, and islands are at the forefront of this movement. Leon Nielsen of CIRCE, and INSULAE project manager, put it in a global context: ‘Infrastructure improvements and societal changes tend to happen together, creating a positive feedback loop – societies benefit from maintaining ecosystems, “green credentials” enhance the islands for citizens and visitors, and local economies and their populations are revitalised, motivating further action – hopefully on the mainland as well since energy is a global problem requiring global action.’

Approximately 11,000 islands on our planet have permanent inhabitants and Europe’s 2,400 islands are home to 16 million people. Their physical separation from the mainland creates significant challenges when it comes to a steady supply of things the rest of us often take for granted – from potable water and the energy to power our homes and businesses.

The research in this article was funded by the EU. If you liked this article, please consider sharing it on social media.

Islands are taking on the decarbonisation challenge

Islands are small and their energy systems are isolated, creating significant challenges both practical and financial. But their abundance of renewable energy sources (RES) provides an opportunity to make a rapid and complete transformation to clean energy – and set an example for other islands and the mainland in the process.

The European Parliament and the European Commission set up the Clean energy for EU islands secretariat in 2018, to help citizens, local authorities, businesses and academic institutions work together to advance the clean energy transition on their island. The secretariat can help islands explore options, shape sustainable and cost-effective solutions, and turn them into actions.

This article was originally published in Horizon, the EU Research and Innovation magazine.