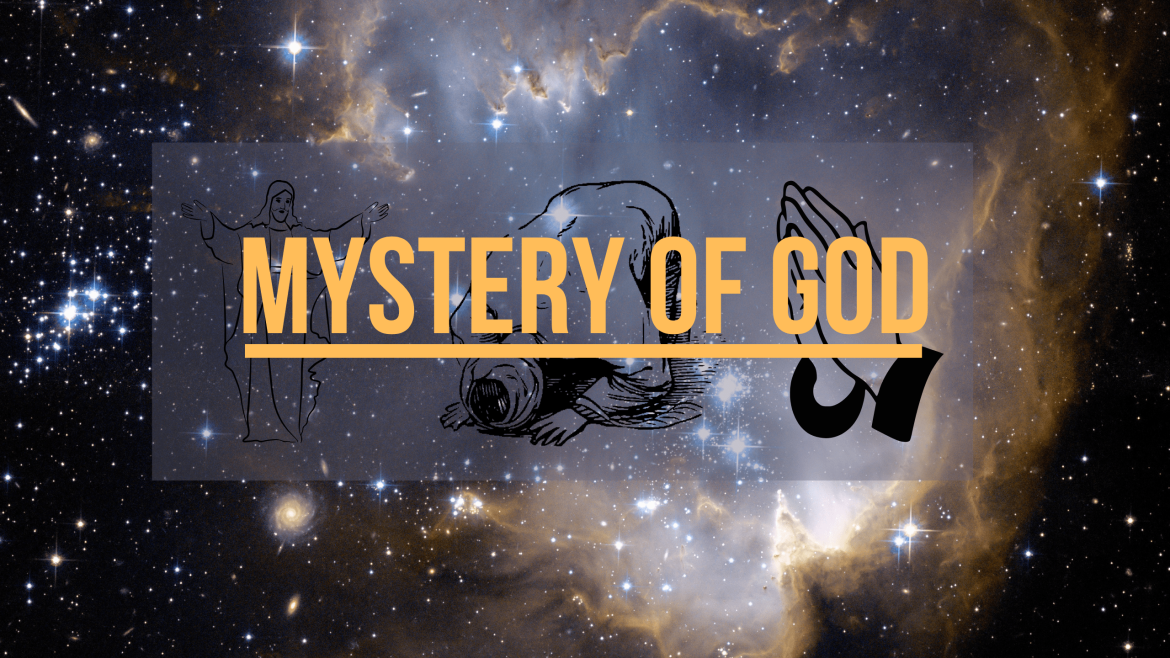 When we talk of the Mystery of God, we are certain about his existence not just because the ancient rituals, cultures, mythology, nor by religious followingsBut human beings are seekers of knowledge and wisdom, and on that journey, they follow either those facts, some unusual happening, or human instincts. It could keep them on the track to learning God’s existence or fall into the trap of making it a mystery.

Human minds can only calculate what they see and find. They are not capable of calculating things that are mystical in nature or just unwise. Although we do question ourselves when in pain or agony that what is happening to us? What does God want from me? Why it is not happening as I think or say? Why can’t God just fix things that I am not able to fix? Or sometimes we get the urge to hear the voice of God or see him? This happens when we are in despair, frustrated, or unable to figure out things in our lives.

Human brains can only feel and understand a limited paradox and beyond that is pure blindness or may be called a blessing. Because, things that we don’t know can’t hurt or do bad to us and when we are happy, we feel content and blessed and say thanks to God and pray for it. That means we believe in God, although we have not seen, touched, or felt him.

Ancient mysteries and historians have described many things about God and given different kinds of clues to God’s mystery. They have drawn pictures of statues and Greek mythology. The Mystery of God is not new and we do look for his existence and try to solve this mystery.

Those who do research normally embrace that God is unknowable, divine, and cannot be described. The word “mystery” means “something impossible to understand, describe or explain.” But then when human sufferings come along, they tend to search for God and follow indications such as seeing stars, the sun, and many things that look strange and then start following them.

Mystery of God by Atheist

Atheists are people who do not believe in God in simple terms. They do not fall into the wise learning of understanding the existence of God. When they are asked to debate religious claims, they would ask for evidence and reject them in the absence of it. According to them by religion, they mean basically Christianity, Judaism, and Islam. For atheists, these all-religion claims for the universe that was created by God must be supported by evidence. Although these religions provide arguments and experiences gained from the world to ascertain the existence of God. Especially Islam provides evidence in Quran about the Existence of God and provides proof that God exists and has created the universe and every being.

Religious explanations and beliefs are surely different kinds of things. They require knowledge and education to grip the maximum extent of learning. Religious knowledge is not technical like physics or any other science subject. Although if you met any scholar, he would suggest otherwise. But we cannot deny that religious beliefs are widespread and commonly practiced around the globe. But the paradox of atheism is a terrifying denial and escape from not only human but all beings’ conception. It’s like you are keeping an affair on one side and trying logically the existence of God and making grave mysteries, pursuing human narrowminded logical means and denying the core existence of God.

Atheists are not backward and give reasons for their non-beliefs with philosophical perceptiveness, literary technique, and theological demonstration. Most atheists shift away from their born faiths and sway away from religious beliefs and get captured by aggressive atheism and put their lives in misery. For feeding their skepticism, they provide reasons and abstain from the religious life, and wander in the very narrow logic they see around them.

Mystery of God by Christianity

The mystery as explained in the New Testament is something that was hidden once and now is revealed. The apostle Paul used the “mystery” word 21 times in his Epistles, which included a declaration of spiritual truth that was revealed through divine inspiration. Mystery also means something that was not known by the people in the older generation, but now has been revealed. Christianity also discusses that the Mystery of God is the divine purpose that was put in effect by God to fulfill the divine determination of bringing all things together in heaven and earth.

The church is the reference of sacraments, the eucharistic liturgy “the sacred mysteries.” The church also speaks about the mystical eulogy of the trinity, the faith, and the mysteries of incarnation. That seems that Christianity is widely surrounded by mystical notions from every side. But when we talk about the young generation, it seems problematic and difficult to get them to believe in the mystical notion of God.

If we take a deep understanding of what mystery means in modern English, we would learn that it is about something that we have less knowledge or understanding of or we completely don’t understand and looks mystified or utterly unexplainable. Like the mysteries of science that encompass the mystical wonders of nature that we have less exposure to or know nothing about. In easy and very normal language we also know that the colloquial meanings of the word mystery are something we are unable to figure out or do not need any explanation or something unexplainable that is left as it is. Christianity deals with the mystery of God in a troublesome manner, something attached to Christ, revealed completely or partially. Christianity explains either an outdated version of the mystery of God, that we could have understood better today or uses the notion to cover up the holes as a flimsy attempt to cover up the historical patches. In other words, with such mystical characteristics, Christianity would have an absence of logic and would be given a false understanding of history.

The important, belief about Allah is that Islam teaches and practices are comprised about six major beliefs and have been laid by Quran and Hadith and being practiced by Muslims around the globe. These beliefs are the pillars, the foundation, and the base of Muslims that expresses;

Believing in the Oneness of Allah, creator of everything, powerful, and knows everything. Allah has no descendant, no race, and no gender, and is the absolute, complete, and undeniable creator. The second belief encompasses angels, worshipping Allah, and fulfilling the orders and will of Allah throughout the universe. The third belief is about the books of Allah that have been revealed by Allah’s messengers and prophets. These include Torah that was revealed to Moses AS, the Gospel revealed to Christ Jesus (Essa AS), the Psalms revealed to David (Daud AS), Scrolls revealed to Abraham AS and the completeness of all was the final Quran that was given to Muhammad PBUH. All other testaments were changed or have had some changes with the passage of time but Quran remains always “Intact” because it is protected by Allah.

The fourth belief reveals that Muslims believe that Allah has revealed guidance to all humankind through messengers, Nabi, and prophets throughout their existence. Adam AS was the first and Muhammad PBUH is the last Prophet of Allah. The fifth belief is about believing on judgment day, where all humans will be judged for their actions in life. Those who followed Allah’s guidance and practiced in their lives will be rewarded paradise and those who rejected would be punished in hell. The sixth belief encompasses in divine decree of Allah and believing that every single happening is governed by Allah and that whatever happens in one’s life either good or bad is preordained and Muslims should respond with thankfulness or patience.

After understanding the concepts of Islam, only one can remain Muslim, who utterly without any question believes in the Oneness of Allah and practices Islam without a doubt. If you have questions, you can recite Quran and find answers in it and you will get satisfied. There is no mystery about Allah! Allah is the only absolute, complete power that has created the universe and is the only force that calls five times a day to pray. Lives in your heart, mind, and soul and is the only power that let humans and all other beings pray and ask for forgiveness. The pillars of Islam, the major practices and duties of Muslims, the declaration (Shahada) of Faith, Prayer of namaz (salat), Zakat (charity), Sawm (fasting), and Hajj (pilgrimage to Mecca). These all when studied thoroughly let us understand that there is no mystery of Allah and Allah is the only absolute creator of all things and all questions are answered.

Faith and belief are the most important thing for souls and religions around the world, all of them incline toward one God, creator, and divine force. Humans have low IQs, are narrowminded, and do not have complete understanding besides that is gifted by God. If you are so search-based then see how nature’s mechanism works and see the system of nature, you will understand that it is created by one divine force. Different religions and faiths have described the notion, according to their own understanding and historical pursuits. And will remain skeptical about the Mystery of God. But you call the sun the sun, the moon, the mars, and the mars, and these are created by one, undivided and complete divine force that lets you have an eternal path towards believing in one God.