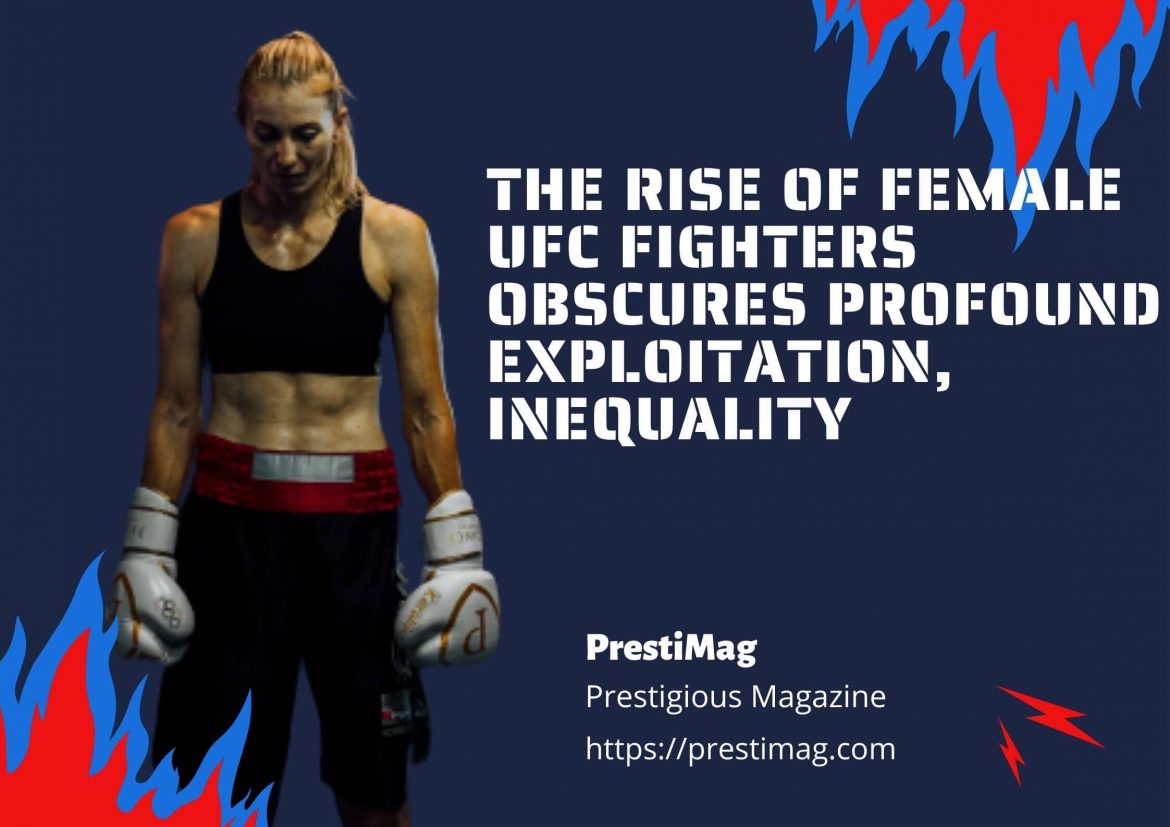 The mixed martial arts pay-per-view event UFC 261 features two bouts that would have been unheard of just 10 years ago.

Russian-born Valentina Shevchenko will fight Jessica Andrade, a Brazilian and an out lesbian, for the women’s flyweight title on April 24, 2021. That same night, Rose Namajunas, an American of Lithuanian descent, will square off against Zhang Weili, who has caused the popularity of the UFC to surge in her native China, for the women’s strawweight title.

The rise of women in mixed martial arts – which the late Sen. John McCain once derided as “human cockfighting” – is remarkable, and reflects the diversity and global appeal of the sport.

But as I write in my new book, “Fighting Visibility: Sports Women and Female Athletes in the UFC,” it’s important for fans and spectators to look beneath the sheen of gender parity.

While women may glow under the bright lights of the Octagon, exploitation and deep inequalities persist.

In 2011, UFC president Dana White famously said that the promotion company would “never” include female fighters. However a year later, the UFC signed Ronda Rousey for a “six-month experiment” in women’s MMA.

Rousey became a star unparalleled in women’s combat sports history. By 2015, she was the UFC’s highest-paid athlete – male or female. Even though Rousey retired from MMA long ago, the UFC continues to court fans by promoting its women fighters.

Lawrence Epstein, the UFC’s chief operating officer, recently told sports business publication Sportico that female athletes are a “huge growth engine” that brings in different audiences for the company. He noted that featuring women had grown the “female fan base” in ways that have “been transformative to the UFC.”

The UFC’s interest in promoting women has been rare in a sporting landscape that regularly objectifies, trivializes or downright ignores sportswomen and their fans.

Selling a message of empowerment

The phrase “representation matters” is popular across an array of brands and platforms today, and consumers are ready to invest in companies that promote women’s and girls’ empowerment – including a stereotypically hypermasculine brand like the UFC.

The UFC has come to understand the power of promoting diverse female athletes for expanding their market and boosting profits. This doesn’t absolve them from the sexism, racism, xenophobia or transphobia that has characterized the promotion over the years. But it does show that the UFC is willing to give women a platform and sell a message of empowerment.

The promotion often depicts female fighters as heroines who, against all odds, have broken barriers in MMA and in sports more broadly.

Seeing women be successful in the sport gives an impression that anything is possible and all the challenges female fighters have faced are behind them.

So yes, representation matters, and female fighters have, relative to other sports, high levels of exposure, especially given that just 4% of all global sports media coverage features female athletes.

But, as retired UFC fighter Julie Kedzie recently told me, “It’s not enough to shatter the glass ceiling. You have to clear the glass.”

In other words, just because women are in the UFC, it doesn’t mean that they’re treated fairly.

The UFC likes to boast that it is unlike any other sport, because female athletes can make as much as men. However, when taking Ronda Rousey out of the equation, there is little evidence to support this.

The UFC isn’t a publicly traded company – at least not yet – so it doesn’t have to disclose athlete pay. Due to the difficulty of obtaining a full picture of fighter pay,the UFC can continue to make claims of parity.

However, most estimates put fighter pay at 10% to 20% of the UFC’s overall revenue, with the bulk of that distributed toward UFC champions and stars – most of whom are men. As a comparison, NFL and NBA players receive around 50% of revenue the leagues take in.

In my research, I obtained a snapshot of fighter pay from some state athletic commissions. Although the picture is incomplete because not all states or countries require the UFC to disclose fighter pay, the data made available to me suggest that the median payout for female fighters is 68% of what male fighters earn.

Fighting can be lucrative for some. But when compared with an MMA empire worth billions of dollars, the reward for individual fighters can seem minuscule – especially when taking into account the mental and physical toll of the sport.

A ‘climate of fear’

Part of the issue around pay inequality is that the UFC has successfully thwarted fighters’ efforts to unionize and create a path for collective bargaining.

The UFC saves a lot of money because their fighters are independent contractors. This means that fighters must pay for things leagues and teams typically cover in other sports. They fund their own training and coaching, health care, management, retirement investments, recovery therapies and taxes out of their UFC payouts or income from other jobs.

This means that outside of the handful of UFC stars, many fighters struggle to make ends meet.

In my book I interview former UFC fighters Leslie Smith and Kajan Johnson, who tried to organize fighters before the organization ended its relationships with both athletes. They contend that the UFC treats fighters as employees and incorrectly classifies them as independent contractors. For example, fighters have to submit to random drug testing and wear UFC partners’ apparel for their fights, which is atypical of contractual relationships. Smith and Johnson believe that unionization is the best chance fighters have to gain more agency, pay and health care.

Lucas Middlebrook, a labor attorney who advised Smith and Johnson, told me that despite the promise of unionizing, “UFC fighters are proving to be a really difficult group to organize.”

“The reason for that,” he continued, “is the climate of fear that’s been created by the UFC. The amount of control that the UFC exerts over these fighters has done just that. It has created this perfect storm of fear of retaliation.”

A union would benefit all UFC fighters, but women and people of color have historically gained the most from unionizing efforts because unions decrease pay gaps and work inequities.

[Over 100,000 readers rely on The Conversation’s newsletter to understand the world. Sign up today.]

If you tune into the Weili vs. Namajunas or Shevchenko vs. Andrade bouts, you’ll see an MMA master clinic from women who wouldn’t have been allowed in the UFC a decade ago.

But will Shevchenko get paid to win what Jorge Masvidal – a male athlete also fighting for a title – would be paid to lose?

I wouldn’t bet on it.

Increased visibility of female athletes is important. But the feel-good mantra of “representation matters” cannot hide the fact that female fighters – and male fighters, for that matter – deserve better working conditions and pay in the UFC.